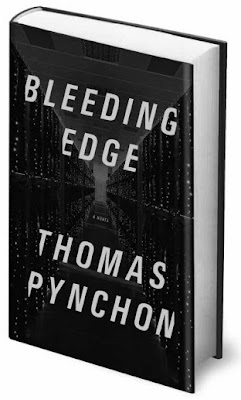 "Bless an author with a long enough career, and even the most outcast elements can get a second chance. In Thomas Pynchon’s encyclopedic, pull-out-the-stops first novel, V. (1963), the Upper West Side merits only a withering dismissal:
This was on Broadway in the 80’s, which is not the Broadway of Show Biz, or even a broken heart for every light on it. Uptown was a bleak district with no identity, where a heart never does anything so violent or final as break: merely gets increased tensile, compressive, shear loads piled on it bit by bit every day till eventually these and its own shudderings fatigue it.
Fifty—fifty!—years later, Bleeding Edge, his latest, situates its heroine, Maxine Tarnow, and much of its action firmly on the 'Yupper West Side.' Though the area retains a rep as 'a vague sort of uptown Dubuque,' Pynchon’s affection for Maxine means the neighborhood gets his signature treatment, three parts laughing gas to one part subterranean profundity."
— Ed Park, BookForum
Read more…

Buy all of Thomas Pynchon's books here...
Posted by Elora Writers Festival at 9:31 AM