The Courage to Hesitate 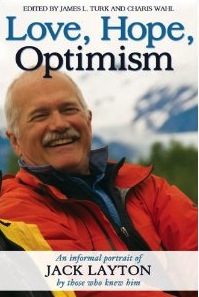 "Olivia Chow is getting ready to lose Jack Layton for a second time.
The CBC drama special Jack, the story of their life together and the death of the former NDP leader from cancer in 2011, will air on Sunday, March 10 at 8 p.m.
Chow hasn’t seen it yet, but she knows the time is coming soon.[…]
The truth is that it can’t be easy for her to relive those emotionally charged months in 2011 when her husband was diagnosed with prostate cancer, fought it while bringing the NDP to major victory, then succumbed to another cancer in a matter of months, dying at his moment of greatest political triumph.
'I wanted Jack’s story to inspire more people to get involved and try to make the world a better place,' is how she explains her reason for allowing this film to be made so close to the actual events."
— Richard Ouzounian, The Record
Read more...

I find it rather disturbing to that the CBC has taken upon itself to produce the drama special "Jack" about the former leader of the NDP Jack Layton so close to his passing.
The story, of course, is hard to resist; it holds all the components of great drama: a man struggling with terminal illness as he tackles the most important political contest of his life. But it seems a bit inappropriate and gratuitous: an exploitation of a grieving process that is still ongoing, not only for his close family and friends, but also for the public at large.
Most endeavours of this kind — the recent Spielberg movie "Lincoln" comes to mind — allow the perspective of history to guide the narrative. If the producers had waited ten years or even longer to approach this subject I'm sure it would have taken on the weight (and value) of a vintage Bordeaux rather than the immediate, fruity, gratification of a Beaujolais nouveau.
There are so many Canadian stories to dramatize: what about a series based on Alice Monro stories? Has anyone made a decent movie about Ernest Hemingway's time in Toronto?
A movie about world-famous contralto Portia White? John McCrea (author of "In Flanders Fields")?
Or Canadian Lieutenant Harry Colebourn, the man responsible (in part) for Winnie the Pooh?

"Christopher Milne {A. A. Milne's son] had named his toy bear after Winnie, a Canadian black bear which he often saw at London Zoo, and 'Pooh,' a swan they had met while on holiday. The bear cub was purchased from a hunter for $20 by Canadian Lieutenant Harry Colebourn in White River, Ontario, Canada, while en route to England during the First World War. He named the bear "Winnie" after his adopted hometown in Winnipeg, Manitoba. "Winnie" was surreptitiously brought to England with her owner, and gained unofficial recognition as The Fort Garry Horse regimental mascot. Colebourn left Winnie at the London Zoo while he and his unit were in France; after the war she was officially donated to the zoo, as she had become a much loved attraction there."
— Wikipedia
Read more…
Posted by Elora Writers Festival at 12:57 PM