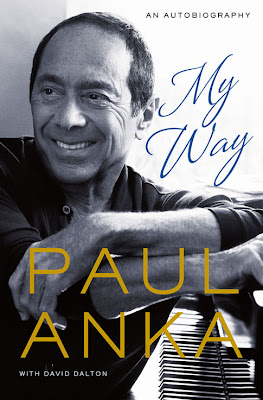 "'It’s got a lot of stuff, but if you’re asking me did I open my veins, the answer is no. There’s stuff in there about me working with the Mafia and Vegas and the early days. But it’s no kiss-and-tell. I kept some things secret.'
My Way, An Autobiography, co-written with David Dalton, will be published by St. Martin’s Press on April 9. His life, of course, is the stuff of legend, starting out as a teenage heart-throb from Ottawa in the late 1950s, and rising to become one of the most admired, and wealthy, performers of his generation.
The book isn’t even on the shelves and it’s creating a buzz.
'I’ve had calls from film producers who heard about it,' said Anka. 'But I’m not there, yet. Maybe it’ll be a stage play. I just want to get it out and go from there.'"
— Ted Shaw, The Windsor Star
Read more…

"Born July 30, 1941, in Ottawa into a tight-knit Canadian family, Paul Anka didn’t waste much time getting his life in music started. He sang in the choir at Church and studied piano. He honed his writing skills with journalism courses, even working for a spell at the Ottawa Citizen. By 13, he had his own vocal group, the Bobbysoxers. He performed at every amateur night he could get to in his mother’s car, unbeknownst to her of course. Soon after, he won a trip to New York by winning a Campbell’s soup contest for IGA Food Stores that required him to spend three months collecting soup can labels. It was there his dream was solidified, he was going to make it as a singer composer; there was not a doubt in his young tenacious mind.
In 1956, he convinced his parents to let him travel to Los Angeles, where he called every record company in the phone book looking for an audition. A meeting with Modern Records led to the release of Anka’s first single, 'Blau-Wile Deverest Fontaine.' It was not a hit, but Anka kept plugging away, going so far to sneak into Fats Domino’s dressing room to meet the man and his manager in Ottawa. When Anka returned New York in 1957, he scored a meeting with Don Costa, the A&R man for ABC-Paramount Records. He played him a batch of songs that included 'Diana' – Costa was duly enthusiastic about the potential of the young singer and songwriter. The rapid and enormous success of 'Diana'- his first number one hit – made him a star."
— Paul Anka (official web site)
Read more...