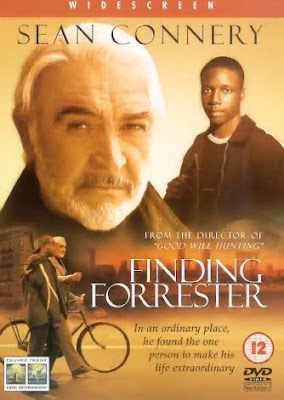 "When I was 13 or so, I watched a movie in which a young writer (played by Frank Sinatra?) and his girlfriend go to an Italian restaurant to celebrate the acceptance of his first short story. The restaurant’s owner is celebrating too, as are all the people sitting at the other tables, which are covered with checkerboard tablecloths and lit by candles dripping wax. Everyone wishes the writer well, no one more so than I, who tried to foresee such a moment when I, too, would become a writer. The acceptance of the story. The cheers. The girl and the life of my dreams.
Most films about the writing life are more accurate, because writers write them. And rarely is the writer shown as successful, triumphant or — are you kidding? — happy."
— Roger Rosenblatt, The New York Times
Read more…

"The movie ['Finding Forrester'] contains at least two insights into writing that are right on target. The first is William's advice to Jamal that he give up waiting for inspiration and just start writing. My own way of phrasing this rule is: The Muse visits during composition, not before. The other accurate insight is a subtle one. An early shot pans across the books next to Jamal's bed, and we see that his reading tastes are wide, good and various. All of the books are battered, except one, the paperback of James Joyce's Finnegans Wake, which looks brand new and has no creases on its spine. That's the book everyone buys but nobody reads."
— Roger Ebert, Chicago Sun-Times
Read more…

What I find irritating about movie (and television) depictions of writers-at-work is the mandatory scene of the anguished protagonist pulling a besmirched-with-words sheet of paper from his/her typewriter, vehemently crushing it into ball and tossing it into an overflowing — with similar tainted and disfigured pages — wastepaper basket.
No matter what our omnipresent "inner critic" says about it, who in their right mind would discard a first draft?
And who, in this post-"Murder She Wrote" age, still uses a typewriter?
Posted by Elora Writers Festival at 1:36 PM