"Why have Japanese consumers not fallen in love with digital reading? 'So far the Japanese have failed to be moved by e-readers from home or abroad, mostly owing to a paucity of content,' says editor and publisher of Japan's E-book 2.0 magazine Hiroki Kamata. Sony (SNE), for instance, has been in the market for more than seven years but has sold only 500,000 e-readers in Japan. Other manufacturers' tablets have begun to sell here, but overall the category is still way behind e-reader take-up in the U.S. or Europe. Tablet sales have tripled since 2011, with market research firm IDC estimating tablet sales in Japan to be 3.6 million units.
Japanese consumers still seem dead set against adopting e-books, showing less interest in them than even the print-worshipping French. According to an R.R. Bowker study, 72% of Japanese consumers said they had not tried e-books and did not want to try them. That compares with 66% of French respondents polled. Overall adoption rates in Japan remain the lowest in the developed world. Only 8% of Japanese readers have downloaded and paid for an e-book compared with 20% in the U.S."
— Michael Fitzpatrick, CNNMoney
Read more…

The best-selling Japanese novel of all time has been Norwegian Wood (ノルウェイの森 Noruwei no Mori?) by Haruki Murakami, published in 1987. It has sold approximately 12 million copies. A similar English language best seller of the same period: The Pillars of Earth, by Ken Follett, has sold approximately 15 million copies since 1989.
Neither compares to the all-time best-selling novel, A Tale of Two Cities by Charles Dickens. Its sales to date — granted, it was published in 1859, but the numbers are still impressive — are approximately 200 million. (data and details from Wikipedia) 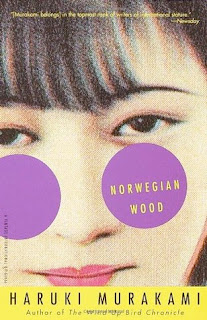 "The novel [Norwegian Wood] is set in Tokyo during the late 1960s, a time when Japanese students, like those of many other nations, were protesting against the established order. While it serves as the backdrop against which the events of the novel unfold, Murakami (through the eyes of Toru and Midori) portrays the student movement as largely weak-willed and hypocritical. […]
Norwegian Wood was hugely popular with Japanese youth and made Murakami something of a superstar in his native country [...]. A film based on this novel and with the same name was released in Japan on 11 December 2010 […]."
— Wikipedia
Read more…
Posted by Elora Writers Festival at 1:23 PM