The word is out... about Terry Fallis


Join us on Sunday, May 26, 2013 (1 to 4 P.M.) at the Elora Centre for the Arts, 75 Melville Street, Elora for a relaxing yet thought-provoking afternoon of readings by Sonia Day, Terry Fallis, Carrie Snyder, Andrew Westoll, Ailsa Kay and Robert Rotenberg.
For $20.00 (includes Reception) you get to enjoy readings by six of Canada's finest authors; a Q&A session; a "Schmooze-fest" replete with wine & appetizers… and BOOKS, BOOKS, BOOKS (Get them signed by the author[s].) courtesy of Roxanne's Reflections.

It's wonderful to have Terry Fallis back with us again in 2013. He knocked 'em dead at the Festival in 2010 and we look forward to what is sure to be an entertaining exegesis of his latest book Up and Down.
Join us in welcoming him back on Sunday, May 26 at the Elora Centre for the Arts. 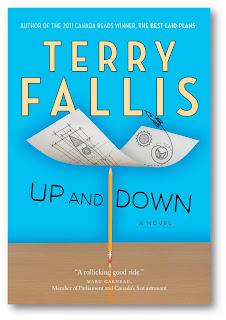 Hot off the press...
"I was thrilled to learn earlier this week that Up and Down has been shortlisted for the 2013 Ontario Library Association Evergreen Award for 'the best in adult Canadian fiction and non-fiction.' I am truly honoured. It’s wonderful to be on the list with such amazing writers as Eva Stachniak, Susan Swan, Robert J. Sawyer, Donna Morrisey, Marina Endicott and others. I gather library cardholders can vote during Ontario Public Library Week in October. I’m grateful to the Ontario Library Association for this unexpected recognition."
— Terry Fallis
Read more…