"[…] she told us that her first step in becoming a writer was buying a publication called Writers’ Markets, which said that the money was in true romance stories. She told us: 'I thought, I‘ll do that during the day and write my deathless masterpieces at night.' There was a certain formula to these stories, she said. 'There would be a choice between two men – one would have a motorcycle and one would work in a shoe store. The woman would get involved with the unreliable one . . . . There were various ways of ending the story. The best way was patching things up with the shoe store guy . . . . But there would always be a scene on the sofa: "and then they were one." I couldn’t bring myself to do that. That wasn’t going to happen.'
Her next idea was journalism school. Her parents, 'biting their tongues', 'dredged up' a journalist second cousin, who told her that, as a woman, she would end up doing 'nothing but obituaries and the ladies’ fashion pages.' She decided to go to university and write in the summer holidays. At the time she graduated, teachers were in great demand, so she taught grammar to engineers at the University of British Columbia. 'At 8.30 in the morning. They were asleep. I was also asleep.' 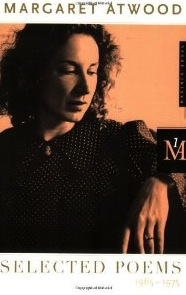 Becoming a professional writer in Canada wasn’t easy for anyone. Atwood told us that in the 1950s and 1960s there were only about five literary magazines. In 1960, only five novels by Canadians were published in Canada. In bookshops, Canadian poetry and fiction would appear in the 'Canadiana' section. Many aspiring writers left for England or the US."
— Catherine Morris, The Times Literary Supplement Blog
Read more…

Buy all of Margaret Atwood's books here...
Posted by Elora Writers Festival at 10:41 AM