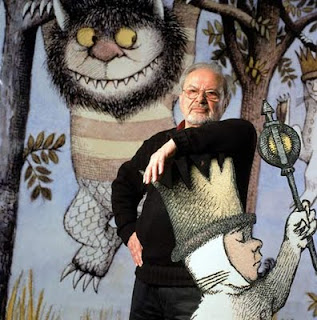 "DANBURY, Conn. — Maurice Sendak, the children's book author and illustrator who saw the sometimes-dark side of childhood in books like Where the Wild Things Are and In the Night Kitchen, died early Tuesday. He was 83. Longtime friend and caretaker Lynn Caponera said she was with him when Sendak died at a hospital in Danbury, Conn. She said he had a stroke on Friday. Where the Wild Things Are earned Sendak a prestigious Caldecott Medal for the best children's book of 1964 and became a hit movie in 2009. President Bill Clinton awarded Sendak a National Medal of the Arts in 1996 for his vast portfolio of work."
— AP (via Huffington Post)
Read more...

And buy all of his books here...
Posted by Elora Writers Festival at 9:50 AM