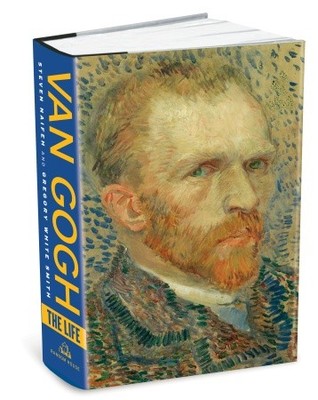 "In their magisterial new biography, Van Gogh: The Life, Steven Naifeh and Gregory White Smith provide a guided tour through the personal world and the work of that Dutch painter, shining a bright light on the evolution of his art while articulating what is sure to be a controversial theory of his death at the age of 37."
— Michiko Kakutani, The New York Times
Read more...

"Moody, bookish, given to sudden enthusiasms and bouts of self-delusion, [Vincent Van Gogh] made several false starts in young adult life. Initially he was set to take advantage of family connections, but a spell working for Uncle Cent, the leading art dealer, in The Hague, Paris and London, wasn't a success and Uncle Vice-Admiral Van Gogh hadn't anything to offer so unseaworthy a school leaver. Striking out as a teacher, he spent a couple of months in the Nicholas Nickleby role at a Dotheboys Hall-type school in Ramsgate ('a resort community on the English coast,' N&S tell us). Then, inspired by Pilgrim's Progress, he turned evangelical but lost the plot.
From a family point of view Vincent was impossible, emulating the Prodigal Son one moment, or collecting birds' nests, or sloping off to dedicate himself to poverty and taking in a pregnant prostitute whom he threatened to marry. 'She knows how to quiet me,' he wrote, knowing full well that every extreme move he made provoked the family on whom he still depended to righteous despair. And then, daftest whim of all, there was the sudden fixation on drawing.
He was in his late 20s when, with what he himself described as 'passion augmented by temperament,' he took to art and began making extravagant demands on his younger brother Theo, who (thanks to Uncle Cent) was by then an up-and-coming dealer. [...]
In 1956, following the publicity around the release of [the movie] Lust for Life, an elderly businessman called Rene Secretan came forward with an account of summer holidays in Auvers when he was 16. In July 1890 he and his brother Gaston kept bumping into this weird Dutchman. Bearding the tramp was something to do instead of just idling or fishing or playing cowboys around the place. (Buffalo Bill's Wild West show had been a hit not long before in Paris.) They put salt in his coffee and chilli on his brushes to watch him splutter, and paraded girls from the Moulin Rouge to get him going.
Secretan the juvenile sharpshooter in his buckskin tunic didn't actually confess to what would have been no doubt an accident, but he indicated that behind a farmyard dungheap in the Rue Boucher, a mile or so from the famous cornfields, a shot was fired and Van Gogh was hit: it was (apart from the grievous outcome) the sort of mishap that a generation or so later occurred on an average Just William afternoon. That the pistol, the painter's easel and his final canvases were never found suggests a cover-up. They were dumped maybe in the nearby river Oise. The Secretan brothers left the village that day."
— William Feaver, Guardian
Read more...

Buy this book here...
Posted by Elora Writers Festival at 11:13 AM