“So this is the little lady who started this great war?” — Abraham Lincoln, on meeting Harriet Beecher Stowe "[...] Originating as a serial, Uncle Tom’s Cabin appeared in book form in the spring of 1852. By mid-October, 120,000 copies had been sold; by the following spring, 310,000. In England it was even more successful, with sales of a million within a year. Michael Winship has called it 'the world’s first true blockbuster.' It may also have been the first bestseller to produce spin-offs-which came to be known as 'Tomitudes': engravings, games, puzzles, songs and sheet music, dramatizations—in Europe as well as the United States. The book was a phenomenon, in its popularity and its influence.
Yet by the early twentieth century it was out of print and would remain so for decades. 'Uncle Tom' became an epithet, representing not the admirable saintliness and sacrifice with which Stowe had sought to imbue her protagonist, but—in the eyes of African Americans such as W.E.B. DuBois and James Baldwin—an embarrassing embodiment of black obsequiousness and self-loathing. In the white segregated South, scorn for Stowe’s book claimed different origins: it was seen as part of a long tradition of Northern meddling in Southern racial arrangements. In South Carolina in 1900, a teacher might well make his students raise their right hands and swear never to read Uncle Tom’s Cabin—an unwitting nod to the book’s power as well as an affirmation of the white South’s racial solidarity. Uncle Tom’s Cabin was certainly never taught as literature in the North or the South, because it was seen by critics and scholars as sentimental and overwrought—less art than propaganda. Hawthorne dismissed Stowe as one of his era’s 'scribbling women.' [...] 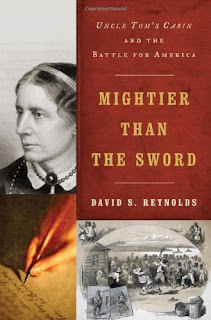 For [David S.] Reynolds, Uncle Tom’s Cabin was 'central to redefining American democracy on a more egalitarian basis'; it made the Bible 'relevant to contemporary life,' and it 'replaced the venal religion of the churches with a new, abolitionist Christianity.' It also 'established a whole new school of popular antislavery literature,' and at the same time gave rise to the pro-slavery argument, which is customarily seen as emerging in force in the 1830s but in Reynolds’s portrayal does not substantially appear until prompted by Stowe’s novel more than twenty years later."
— Drew Gilpin Faust, The New Republic
Read more...

Buy these books here...
Posted by Elora Writers Festival at 10:57 AM