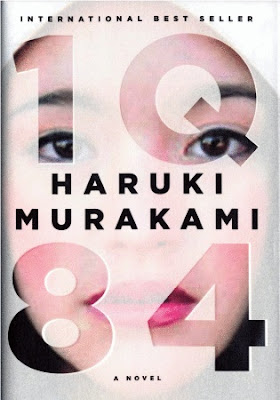 Most people can’t, or at least don’t, read a 925-page book in a couple of nights. In fact, if you happen to have any of the following: (i) a television, (ii) access to the Internet, (iii) one or more children, (iv) regular bathing habits, or (v) gainful employment in a job where your responsibilities do not include getting paid to read books, it would probably be difficult to finish a book this long in a week, or even two. Life just gets in the way. For argument’s sake, let’s assume it would be closer to a month, a month in which a typical person might take 30 showers, eat 90 meals, spend maybe 200 hours at work. [...]
This kind of world-shifting is possible with Haruki Murakami’s new novel [1Q84] (originally published in Japan in serial form as three books), which opens with Aomame, a young woman living in Tokyo, stuck in traffic, in a taxi, on the highway. The year is 1984, and Aomame is very late for work, which is a big deal, given that Aomame is no accountant or lawyer, but rather a contract killer specializing in the murder of men who abuse their wives. On the advice of the cab driver, Aomame decides that it would be a good idea to walk along the shoulder of the highway, and climb down an emergency stairway in order to get down into the subway station and to her assignment on time. Only, when Aomame emerges from the stairway, she picks up on subtle hints (the cut of a policeman’s uniform is slightly different, the firearm he is carrying is a different model) that her shortcut may have been an exit in more ways than one. The world has shifted, or perhaps she has shifted between worlds. In the words of Aomame’s cryptic cab driver, 'things are not what they seem.' [...]
The novel is strongest when it sticks to its most powerful idea, the one implied by its title: the world as a kind of question. Early on in the book, Tengo thinks to himself that the role of a story is, 'in the broadest terms, to transpose a single problem into another form.' Murakami starts with the problem, what is real? and he transposes it into another form, an entire world, slightly revised. Murakami’s 925-page novel seems to be suggesting that, when you get down to it, the key to the question is love.”
— Charles Yu, Los Angeles Review of Books
Read more...

Get this book here...
Posted by Elora Writers Festival at 10:45 AM