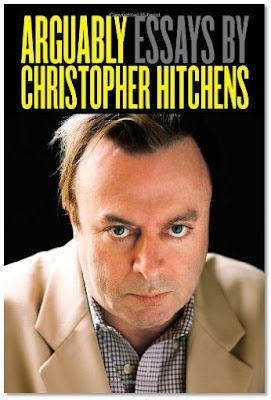 "'In whatever kind of a 'race' life may be, I have very abruptly become a finalist,' Mr. Hitchens wrote in Vanity Fair, for which he was a contributing editor.
He took pains to emphasize that he had not revised his position on atheism, articulated in his best-selling 2007 book, God Is Not Great: How Religion Poisons Everything, although he did express amused appreciation at the hope, among some concerned Christians, that he might undergo a late-life conversion.
He also professed to have no regrets for a lifetime of heavy smoking and drinking. 'Writing is what’s important to me, and anything that helps me do that — or enhances and prolongs and deepens and sometimes intensifies argument and conversation — is worth it to me,' he told Charlie Rose in a television interview in 2010, adding that it was 'impossible for me to imagine having my life without going to those parties, without having those late nights, without that second bottle.'”
— William Grimes, The New York Times
Read more...

"Christopher Hitchens was a wit, a charmer, and a troublemaker, and to those who knew him well, he was a gift from, dare I say it, God. He died today at the MD Anderson Cancer Center, in Houston, after a punishing battle with esophageal cancer, the same disease that killed his father.
He was a man of insatiable appetites—for cigarettes, for scotch, for company, for great writing, and, above all, for conversation. That he had an output to equal what he took in was the miracle in the man. You’d be hard-pressed to find a writer who could match the volume of exquisitely crafted columns, essays, articles, and books he produced over the past four decades. He wrote often—constantly, in fact, and right up to the end—and he wrote fast; frequently without the benefit of a second draft or even corrections. I can recall a lunch in 1991, when I was editing The New York Observer, and he and Aimée Bell, his longtime editor, and I got together for a quick bite at a restaurant on Madison, no longer there. Christopher’s copy was due early that afternoon. Pre-lunch canisters of scotch were followed by a couple of glasses of wine during the meal and a similar quantity of post-meal cognac. That was just his intake. After stumbling back to the office, we set him up at a rickety table and with an old Olivetti, and in a symphony of clacking he produced a 1,000-word column of near perfection in under half an hour."
— Graydon Carter, Vanity Fair
Read more...

Buy all of Christopher Hitchens' books here...
Posted by Elora Writers Festival at 11:26 AM