"[...] Thankfully, there have been plenty of fearless female writers prepared to subvert stereotypes, create unique visions at great personal cost and who, despite everything, refuse to be written out of history. The fact we have to search hard to find them speaks volumes for the treatment of those who enriched Irish culture immeasurably. And whilst the idea of individuals triumphing over adversity is an attractive one, all too often history proves it to be just a well-intentioned myth.
Today, Jonathan Swift (1667 - 1745), author of the satirical classics Gulliver's Travels, A Modest Proposal and A Tale of a Tub, is regarded as the father of Irish letters and a writer of international renown. Less well-known is his friend Laetitia Pilkington (1709 - 1750) yet Pilkington is an essential component of what we know about Swift and a fascinating individual in her own right.
Raised by the talent-spotting Swift into the fashionable Dublin intelligentsia of the time, Pilkington and her reverend husband Matthew were lauded for a time as intellectuals of note yet disaster would soon loom. After relocating to London, Pilkington discovered her husband conducting an affair with an actress and reacted by starting her own dalliance with the hedonistic painter and cad James Worsdale. It would be a costly decision. When news of the liaison (and other reputed incidences with a handsome doctor) became public, the ensuing divorce bankrupted Pilkington and resulted in her being ostracized from high society.
Cast out of her home in the dead of night, she was denied access to her children, later spending a period in debtor's prison and suffering sustained abuse whilst down and out. Her former mentor Swift ditched her as an acquaintance and sought to blacken her name as 'the most profligate whore in either kingdom'. Yet she would have her revenge. Forced to sell ghost-written poems to vain, talentless poseurs, she began to write gleefully salacious accounts of the private lives of the leading cultural figures she'd associated with, terrifying them (yet capturing them in three dimensions, Swift included, forever) and delighting the public in the process."
— Darran Anderson, Verbal Magazine
Read more... 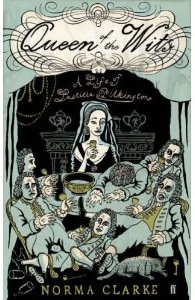 "Laetitia Pilkington was tiny. Jonathan Swift, having made her remove shoes and stockings, stood her against a wall, pressed heavily upon her head and announced that she measured three feet two inches. Even allowed to stand up straight, she barely reached four feet, and her husband wasn't much taller. Both were clever and poetically inclined: both – temporarily – amused the author of Gulliver's Travels. He dubbed them 'Mighty Thomas Thumb' and 'Her Serene Highness of Lillyput.' A powerful, whimsical and casually malicious man, Swift raised the Pilkingtons high before dropping them. He described Laetitia as 'the most profligate whore in either kingdom,' and attempted to erase all mention of her from his writings. But she was not so easily beaten and her memory was sharp. Her robust and revealing anecdotes about the Dean of St Patrick's were to become the cornerstone of her fame."
— Norma Clarke, The Independent
Read more...

Get this book about Laetitia Pilkington, and all of Jonathan Swift's books here...
Posted by Elora Writers Festival at 1:34 PM