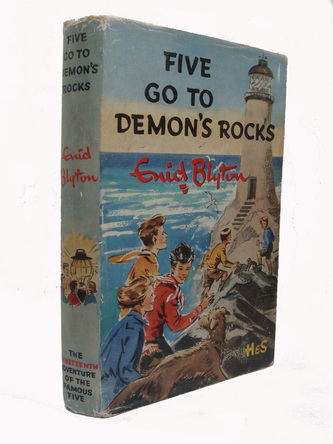 "The first Blyton book I remember reading, as a child of Sri Lankan immigrants growing up in small-town Canada, was Five on a Treasure Island. In it, four kids and a dog search for a cache of gold while avoiding grown-ups, dungeons, and other dark forces. I read other Famous Fives and Adventure books before coming to a disorienting realization. The kids in these stories were supposed to be white. I had assumed they were brown. These were, after all, stories my mother had read while she was growing up in Sri Lanka. I naturally assumed they were set there, and I populated them accordingly.[...]
[David Rudd, a professor of Children’s Literature at Bolton University in the UK] told me that 'Most adults look on Blyton as someone they loved, but when they go back and try to read her they find her reprehensible in many ways,' which include simplistic, repetitive stories and bland characters. Formal weaknesses aside, I asked him if he also thought she represented British children’s holiday adventures as the impossible-to-have ideal of childhood experience itself, particularly for young readers in the colonies. He allowed that the books are based on 'a British middle-class sort of place from the 1950s and 1960s,' but the colonial readers he interviewed 'didn’t see England as such' in them.
Instead, many tended to 'supply their own local vegetation, etc.' When I told him that I once thought Blyton’s books were full of brown kids like me, he wasn’t surprised. 'Everyone sort of inhabits the hero’s role.' "
— Randy Boyagoda, The Paris Review
Read more...