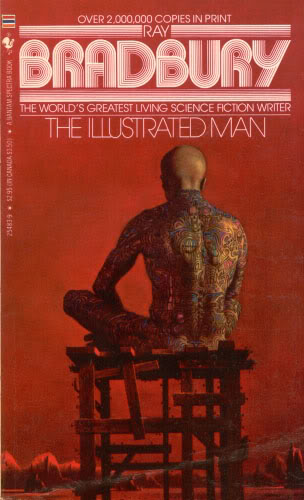 "Ray Bradbury died in Los Angeles, California, on June 5, 2012, at the age of 91, after a 'lengthy illness,' coincidentally during a rare transit of Venus. The New York Times' obituary stated that Bradbury was 'the writer most responsible for bringing modern science fiction into the literary mainstream.' The Los Angeles Times credited Bradbury with the ability 'to write lyrically and evocatively of lands an imagination away, worlds he anchored in the here and now with a sense of visual clarity and small-town familiarity.'
Bradbury's grandson, Danny Karapetian, stated that Bradbury's works had 'influenced so many artists, writers, teachers, scientists, and it's always really touching and comforting to hear their stories.' The Washington Post hallmarked several modern day technologies that Bradbury had envisioned much earlier in his writing, such as the idea of banking ATMs and earbuds and Bluetooth headsets from Fahrenheit 451, and the concepts of artificial intelligence within I Sing the Body Electric!."
— Wikipedia
Read more...

"His influence can be seen and felt in the labyrinths of Lost, in back episodes of X-Files — in fact, every time you see a movie or TV show that shades from nostalgia slowly toward terror or wonder, you’re seeing a little bit of Ray Bradbury. For six decades, his name was enough to tip you to the reading experience awaiting you below the byline. When you saw it, you knew you were going to be taken someplace you’d never been, shown things you hadn’t seen, given vision of a future or a past or another world just enough like your own to give a smile of recognition, just different enough to raise the hairs on the back of your neck. [...]
In all his fiction, Bradbury’s concerns were with his characters, rather than with whatever science-fictional idea those characters were arrayed against. There’s more mood than melodrama in his work, more filigree than flash. In some ways, his work anticipated the character-driven concerns of Philip K. Dick in the later '50s, or, in the '60s, Harlan Ellison or Ursula K. LeGuin or Robert Silverberg. Stephen King clearly learned Bradbury's lessons, particularly his early stories such as The Body.
If he is best remembered today as a science fiction writer, it's not only because his sci-fi was among his finest work, but also because he brought to science fiction the gifts and concerns of a mainstream literary writer."
— Keith Ferrell, ReadWriteWeb
Read more...