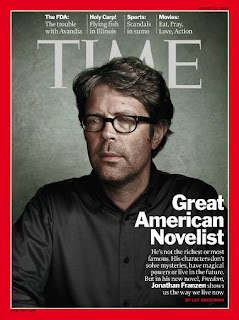 "I can still vividly remember reading, back in 2001, the New York Times Magazine write-up on the release of The Corrections. It began:
'Some days, Jonathan Franzen wrote in the dark. He did so in a spartan studio on 125th Street in East Harlem, behind soundproof walls and a window of double-paned glass. The blinds were drawn. The lights were off. And Franzen, hunched over his keyboard in a scavenged swivel chair held together with duct tape, wore earplugs, earmuffs and a blindfold. ''You can always find the 'home' keys on your computer,'' he says in an embarrassed whisper, explaining how he managed to type under such constraints. “They have little raised bumps.”'
What could drive a man to such madness? Later in the piece, I learned:
'"I'm very concerned with providing a maximally enthralling experience,'' Franzen says of his work. ''Another 20 years of boring literary novels, and the thing's dead.'''
Even then, this struck me as a wonderful piece of theater. Imagine persuading the Times that you’ve personally saved the novel—blindfolded!
[...] Franzen took to the pages of Harper’s, opining on the talent in the room, the condition of the novel, the condition of his novel. Nor did he court success through public gestures alone; his private life, too, he shaped ergonomically to the purpose. The very furniture of that tiny Harlem studio—the drawn blinds, the duct-taped chair—set the stage for his coup. Ears plugged, eyes covered, he willed himself to become the figure he’d dreamed of being, a figure he feared might go extinct: the celebrated novelist."
— Austin Allen, big think
Read more... 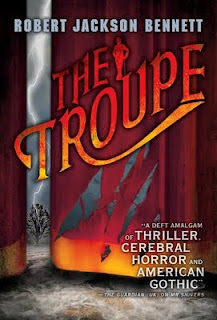 "This is, of course, a sales-driven industry, and in these internetty days there’s more competition and more ways to compete than ever. It’s not enough for the author to have written a book and for that book to be, however you define it, good – the author must also be visible online, actively selling and promoting their product to the best of their abilities.
Whether or not this is the author’s job may no longer be a question. A web presence of some kind is almost always required for a new author, and web activity can only help. I just happened to be enough of a dork to already own a blog in some deplorable corner of the internet.
The issue I’m starting to have my doubts about is the author’s visibility. I know it’s probably pie-in-the-sky idealism talking here, but I do think most types of art suffer the more the audience knows about the creator. Not only does familiarity lead to contempt, but (especially in literature) the anonymity of the creator’s voice lends it authority and impact. It becomes steadily harder to take someone’s work seriously the more you know about them.
[...] It’s sort of a Catch-22 situation. For new authors, it’s so necessary to make sales that we are perfectly willing to create blogs and facebook groups and twitter hashtags for our work, and in many ways that can help considerably. But it’s also perfectly possible that the more we expose ourselves and lunge forward for our audience’s attention, the more we detract from the actual reading experience."
— Robert Jackson Bennett
Read more...
Posted by Elora Writers Festival at 8:09 AM