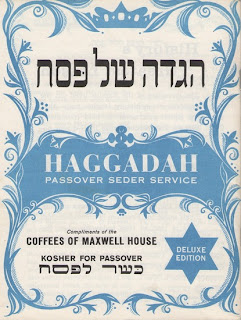 “'I know this is cheesy ...' [Jeffrey] Goldberg started, but before he could finish, the president interrupted him. 'What, you have a book?' Mr. Obama asked. Turns out, Mr. Goldberg did, but 'it’s not just any book,' he replied.
Mr. Goldberg reached into his briefcase and handed the president an advance copy of the New American Haggadah, a new translation of the Passover liturgy that was edited by Jonathan Safran Foer and contains commentary by Mr. Goldberg and other contemporary writers.

The idea was to draw readers into the story and invite them to linger, since 'the Haggadah must be the most skimmed book of all,' Mr. Foer said. After a pause, he added, 'maybe Stephen Hawking’s Brief History of Time beats it.'

After thumbing through the sleek hardcover book, Mr. Obama looked up and asked wryly, 'Does this mean that we can’t use the Maxwell House Haggadah anymore?'
Mr. Goldberg was impressed. 'Way to deploy the inside-Jewish joke,' he later said. Since the 1930s, Maxwell House has printed more than 50 millions copies of its pamphlet-style version of the Haggadah. It has been the go-to choice at the Obamas’ White House Seders, though Mr. Goldberg hoped the president would consider using their version this time around.
In the end, the White House decided to stick with the Maxwell House next month. But the book’s advance buzz is an unlikely triumph for a version of a ritualistic text that was spearheaded by two lauded experimental novelists from Brooklyn, Mr. Foer and Nathan Englander.
'The Haggadah is the user’s manual for the most widely celebrated Jewish holiday, Passover,' Mr. Foer said on The Colbert Report last Tuesday. 'It’s one of the oldest continually told stories, and one of the most well-known across cultures.'
— Alex Williams, The New York Times
Read more...
Posted by Elora Writers Festival at 3:55 PM