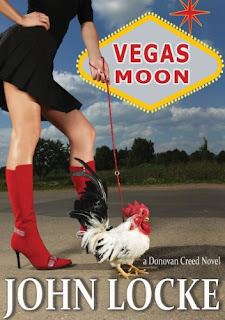 "Jim 'Lucky' Peters was in Jamaica getting a colonoscopy from a Rastafarian proctologist, when his cell phone started buzzing"
— first words of Vegas Moon by John Locke
Read more...

"Kentucky novelist John Locke is the first self-published author to sell more than a million digital books on Amazon.com. His 'Donovan Creed' series, about a former CIA assassin, has captivated an audience largely comprised of women over age 45, who eagerly shell out 99 cents per book. Call him a best-selling late bloomer: Locke, 61, published his first novel three years ago. [...]
Locke is an author that readers either adore or detest, judging by the comments on amazon.com, which range from: 'sassy, irreverent and totally captivating!' to 'preposterous, juvenile, appallingly bad.' Locke shrugs it off: 'You have to polarize people to develop serious fans,' he said. '(My books) are not for everybody; but the people who love one book read all the books.' As for those critics: 'I sold insurance door to door for a living. What are you going to say to me that hurts my feelings?'
By Locke's unofficial count, 70 percent of his readers are women, and three-quarters are 45 or older. Why? 'Donovan Creed is enormously flawed,' he said. 'I think the reason women like this character is because they feel with the right influence he's utterly salvageable—like the big dog you find at the pound. He tears up your house and your yard and just when you're about to take him back, he saves your life.'
— Laura Rowley, Huffington Post
Read more..

"Three of the books on the List were written by the same author, John Locke. Locke’s book, Saving Rachel, was the first Indie book in history to hit #1 on Amazon/Kindle. In total, he has sold more than 875,000 downloads since January. March book sales of 369,115 on Kindle alone means that approximately every 7 seconds, 24 hours a day, a John Locke book was downloaded somewhere in the world. Locke expects to pass the one million sales mark for Kindle by the end of May, something only three other authors in history have achieved: Stieg Larsson, James Patterson, and Nora Roberts."
— IndieReader
Read more...
Posted by Elora Writers Festival at 11:01 AM