Painting With a Battered Remington 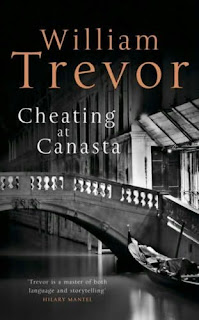 "William Trevor was born in County Cork in 1928 and has lived in England since the 1950s. He gave up sculpture when he turned 30, became a copywriter, and wrote his first two novels and several stories largely on company time. These stories, composed 'on a battered Remington typewriter in an office corridor in London' and set in England, were 'driven by curiosity about the unfamiliar.' [...]
A conversation between a Protestant and Catholic priest is the subject of his most recent great story, Of the Cloth (2000), which, although completely grounded in concrete reality, hovers at fable's borders in a way similar to John Cheever's The Swimmer. It is a reminder that if Trevor's range of subjects has narrowed it has done so, as he described recently, in the manner of painters who 'paint the same subject many times … in search of another angle, another viewpoint …' In 1989, he made another comparison with painting when he was asked to define the short story:
'I think it is the art of the glimpse. If the novel is like an intricate Renaissance painting, the short story is an impressionist painting. It should be an explosion of truth. Its strength lies in what it leaves out just as much as what it puts in, if not more. It is concerned with the total exclusion of meaninglessness. Life, on the other hand, is meaningless most of the time. The novel imitates life, where the short story is bony, and cannot wander. It is essential art.'"
— Chris Power, The Guardian
Read more...