Pigs Will Be Pigs 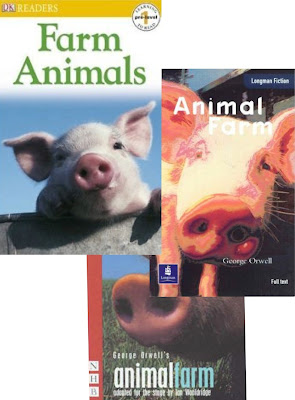 "I grew up with George Orwell. I was born in 1939, and Animal Farm was published in 1945. I read it at age nine. It was lying around the house, and I mistook it for a book about talking animals. I knew nothing about the kind of politics in the book – the child's version of politics then, just after the war, consisted of the simple notion that Hitler was bad but dead. To say that I was horrified by this book would be an understatement. The fate of the farm animals was so grim, the pigs were so mean and mendacious and treacherous, the sheep were so stupid. Children have a keen sense of injustice, and this was the thing that upset me the most: the pigs were so unjust."
— Margaret Atwood, The Guardian
Read more…

Buy all of George Orwell's books — and everything by Margaret Atwood — here...
Posted by Elora Writers Festival at 5:08 PM