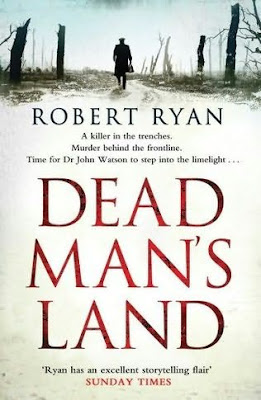 "Thousands are dying every day in the trenches as the First World War rages so one more corpse is hardly going to be investigated or even remarked upon.
Yet eventually it is and says one character: 'When we signed up for this, we thought we knew who the enemy was. Over there. Fritz. The Hun. But who’s the enemy now… The enemy might be the bloke next to you, the one bringing the tea, even your lieutenant.'
The detective, who at the beginning of this novel is taken up into the air in a hot air balloon to survey the blasted horror of no man’s land and the sweeping field of Flanders beyond is none other than Dr (Major) Watson, formerly of Baker Street and formerly Sherlock Holmes’s devoted sidekick."
—Jennifer Selway, Daily Express
Read more...

Get this book here...
Posted by Elora Writers Festival at 2:57 PM