“Members of The Writers’ Union of Canada’s sister organization, the Union des écrivaines et des écrivains québécois (UNEQ), demonstrated last week outside Montreal’s Great Library, calling for a nine-month period of discount control for new books. TWUC commends all recent protest actions in Quebec by writers, publishers and booksellers demanding subtle market regulation as a means of support for French-language literature.
'More than anything else, the Quebec protests are about preserving the diverse, home-grown literature we’ve all spent so many decades building,' said Dorris Heffron, Chair of The Writers’ Union of Canada. 'TWUC stands with UNEQ in expressing our concern.
The recent and rapid collapse of independent bookselling within the province of Quebec has led to a demonstrable contraction of available titles for Quebec’s book consumers. TWUC believes there is a place for retailers of all sizes in the book market, and that the pricing of books should reflect a fair and competitive market. The market damage from uncontrolled discounting leads to lower royalty rates for writers, discouraging the creation of new work. Market controls exist in other countries for similar reasons."
— The Writers’ Union of Canada 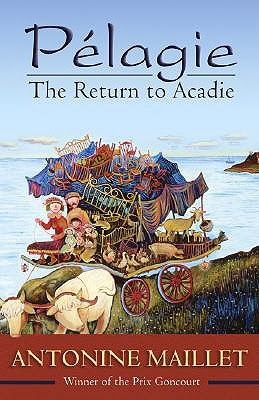 "In 1979, the legendary Acadian novelist Antonine Maillet won France's most coveted literary award, the Prix Goncourt, for the original version of this novel, Pélagie-la-Charette. In her acceptance speech, she said, 'I have avenged my ancestors.'
Goose Lane Editions is proud to re-issue this classic of Acadian literature to mark the 400th anniversary of the founding of Acadie and the début of the novel's musical adaptation, Pélagie: An Acadian Odyssey. [...]
This funny, lyrical account of a daring Acadian widow's journey home from exile is the Mother Courage of Acadian literature.”
— goodreads
Read more…