sold down the river 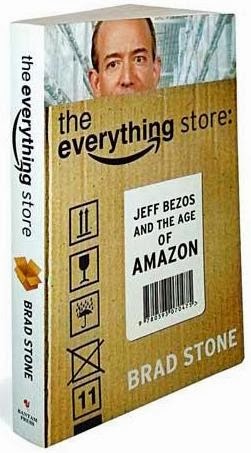 “‘A shilling life will give you all the facts,’ wrote W. H. Auden, tipping his hat to the biographer’s art while lamenting its utter inadequacy. Jeff Bezos, whose total conquest of e-commerce has made him one of the most famous people on the planet, has until now evaded any serious biographer. There have been shilling lives in the strictest sense, from the cut-and-paste job of Richard L. Brandt’s One Click: Jeff Bezos and the Rise of Amazon.com to the YA hagiography of Josepha Sherman’s Jeff Bezos: King of Amazon.com (“From the time he was a toddler, Bezos was busy trying to change his world. He felt he was too old to sleep in a ‘baby’ crib, so he found a screwdriver and took the crib apart!”).
But Bezos has tightly controlled the flow of information about himself and his company. What readers have encountered is the same small fund of recycled anecdotes, most of them focusing on his childhood (brilliant nerd, inveterate tinkerer, ardent Trekkie) and the creation myth of Amazon itself, complete with the now obligatory reference to the role played by the founder’s suburban garage.
Now, nearly twenty years after Bezos sold his first book online — for the record, it was Douglas Hofstadter’s appropriately brilliant and nerdy consideration of artificial intelligence Fluid Concepts and Creative Analogies — a skilled, stubborn biographer has finally caught up with him.”
— James Marcus, Harper’s Magazine
Read more…