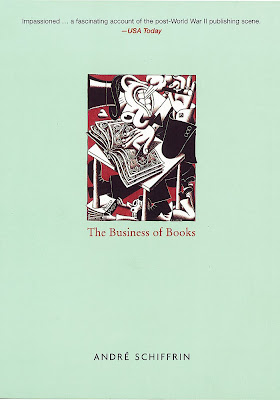 "PARIS - Andre Schiffrin, the literary editor who gave readers Art Spiegelman, Michel Foucault and Studs Terkel before he was forced out of commercial publishing in a defining battle between profits and literature, has died in Paris. He was 78. Schiffrin, who died Sunday of pancreatic cancer, had sought out authors through his final days, dividing his time between New York and Paris as founding editor and editor at large of the non-profit New Press, said Ellen Adler, the imprint's publisher. Schiffrin founded the New Press after his highly public departure from Pantheon Books in 1990. At least four other Pantheon editors walked out with him, as did numerous authors.”
— Lori Hinnant, The Associated Press via Yahoo!
Read more…

“The demise of a force in American literary publishing, André Schiffrin, in Paris at age 78, offers a moment to reflect on how Big Publishing works, and exactly how deep is its true reverence for the cultural and intellectual values that it wheels out periodically to defend copyright extension, DRM, the Apple price-fixing cartel, and its other self-interested curbs on free expression. For the former chief editor of Pantheon Books was the focus of a storm over editorial integrity versus commercial pressures when he was fired by the company’s parent Random House in 1990, in a move which many authors and others dubbed corporate censorship.
Schriffrin’s father Jacques Schriffrin was the creator of the Bibliothèque de la Pléiade, an imprint with immense cultural prestige in France. The Schriffrin family fled to New York when Vichy France’s anti-Jewish laws demanded his father’s dismissal from the company he founded. In 1962, Schriffrin joined Pantheon Books, already in the hands of Random House, as executive editor, and championed authors such as Marguerite Duras, Günter Grass, and Noam Chomsky. However, the imprint was concerned to use its revenues to finance less commercially successful books rather than to enrich its parent’s bottom line, and eventually there was a collision with Alberto Vitale, the new chairman of Random House, who asked Schriffrin to resign after he refused to cut either Pantheon’s list or its staff. Writers who demonstrated or spoke out against his dismissal included E.L. Doctorow, Studs Terkel, and Kurt Vonnegut Jr.”
— Paul St John Mackintosh, TeleRead
Read more…