Books that grab you 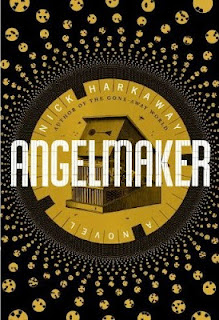 "Nick Harkaway's Angelmaker, which manages to combine a 90-year-old super spy, a clockwork repairman and a cunning plan to destroy every living thing in the universe, has won him the Kitschies Red Tentacle award for the most intelligent, progressive and entertaining speculative novel of the year.
Set up by the books site Pornokitsch, the Kitschies go annually to books that 'elevate the tone' of genre fiction. The Red Tentacle prize for best novel – which comes with a large, tentacular trophy, £1,000 and a bottle of Kraken rum – has been won in the past by books including Patrick Ness's A Monster Calls, Lauren Beukes's Zoo City and China Miéville's The City and the City.
Harkaway's second novel, Angelmaker, in which gangster's son turned clockwork repairman Joe Spork tries to put a stop to monks who are plotting the universe's destruction, beat titles by Adam Roberts, Frances Hardinge, Jesse Bullington and Julie Zeh to win this year's award."
— Alison Flood, The Guardian
Read more…

Get all the books mentioned in this post here...
Posted by Elora Writers Festival at 2:32 PM