The word is out... about Robert Rotenberg

Join us on Sunday, May 26, 2013 (1 to 4 P.M.) at the Elora Centre for the Arts, 75 Melville Street, Elora for a relaxing yet thought-provoking afternoon of readings by Sonia Day, Terry Fallis, Carrie Snyder, Andrew Westoll, Ailsa Kay and Robert Rotenberg.
For $20.00 (includes Reception) you get to enjoy readings by six of Canada's finest authors; a Q&A session; a "Schmooze-fest" replete with wine & appetizers… and BOOKS, BOOKS, BOOKS (Get them signed by the author[s].) courtesy of Roxanne's Reflections.


"I really can’t remember a time when I wasn’t thinking of stories, then writing them. When I was seven my oldest brother got a portable typewriter for his Bar Mitzvah. I was transfixed by it. I’d sneak into his room and use it. And I read everything on the bookshelves of my two very smart older siblings. When I was 15, I sent a short story to the New Yorker. (I kept the rejection letter, on their letterhead no less, for years.) I wrote my first film script the next year."
— Robert Rotenberg, robertrotenberg.com
Read more...

"After graduating from law school in Toronto, Robert Rotenberg became the managing editor of Passion, the English-speaking magazine of Paris. He then returned to publish and edit his own magazine, T.O. The Magazine of Toronto.
Eighteen years ago he opened his own law practice and is today one of Toronto’s top criminal lawyers, defending, as he likes to say 'everything from murder to shoplifting.'
Rotenberg lives in Toronto with his wife, television news producer Vaune Davis, [and] their three children."
— Simon & Schuster
Read more… 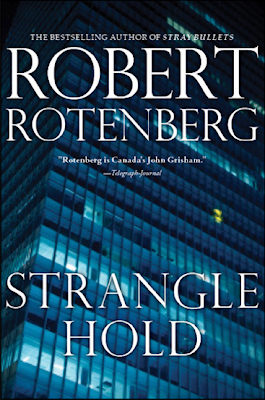 "Rotenberg's first novel, Old City Hall, was set in Toronto, and as the name suggests, features pivotal scenes in the city's historic Old City Hall. It was shortlisted for The Crime Writers Association John Creasey (New Blood) Dagger Award at the 2009 Crime Thriller Awards. Since then he has published The Guilty Plea (2011), and Stray Bullets (2012).
His new book Stranglehold will be released in May, [just in time to be featured at the Elora Writers' Festival.]"
— Wikipedia
Read more...

Get all of Robert Rotenberg's books here...
Posted by Elora Writers Festival at 10:29 AM