From Surfing to Serfdom 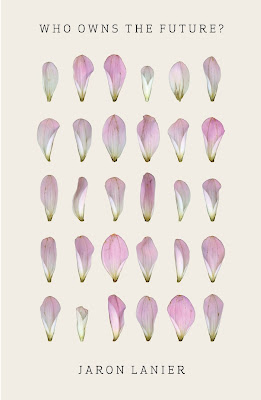 "In Who Owns the Future? [Jaron Lanier] tellingly questions the trajectory of economic value in the information age, and argues that there has been a fundamental misstep in how capitalism has gone digital. For Lanier, late capitalism is not so much exhausted as humiliating: in an automated world, information is more important to the economy than manual labour, and yet we are expected to surrender information generated by or about ourselves – a valuable resource – for free. […]
In his view, disproportionate economic power now accumulates around companies who 'own the fastest computers with the most access to everyone's information.' We donate extremely lucrative information – our interests, demographic predilections, buying habits, cyber-movements – in exchange for 'free' admission into social media networks. (Digitisation has also allowed banks to repackage the 'information' of a mortgage debt and sell it on as increasingly complex financial products, while excluding the indebted home-owner from a percentage of the profits.)
Lanier argues that the early internet years have fetishised open access and knowledge-sharing in a way that has distracted people from demanding fairness and job security in an economy predicated on data flow."
— Laurence Scott, The Guardian
Read more…
Posted by Elora Writers Festival at 12:15 PM