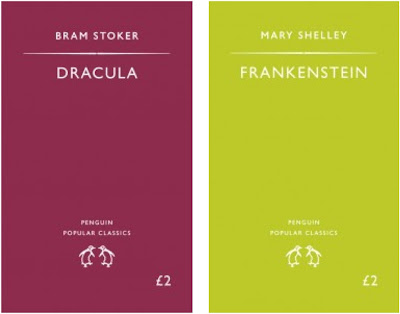 "[…David Pearson, on-time, Penguin in-house designer] was [...] responsible for the 2007 redesign of the Penguin Popular Classics series, the cheapo, no-introduction, no-scholarly notes edition originally brought out to counter the threat of Wordsworth Classics. The previous look had been full bleed artwork with a tan-coloured oval title box towards the top. They were, to be charitable, twee in the extreme. To be uncharitable, they were horrid.
Penguin ran an internal competition to come up with a comprehensive overhaul of the series. Five designers submitted, and Pearson won with a super-plain, type-only design featuring modern Gill Sans lettering, a doubled up logo featuring two dancing penguins (to denote, perhaps rather obliquely, the ‘popular’ aspect) and the £2 price tag, prominently, even proudly, displayed. The cover was an equally restrained maroon."
— Jonathan Gibbs, The Independent
Read more...


An early Penguin cover design. Note the price: "One shilling and sixpence," which by today's reckoning (since Decimal Day in 1971) would be 7 1/2p.
Posted by Elora Writers Festival at 11:18 AM