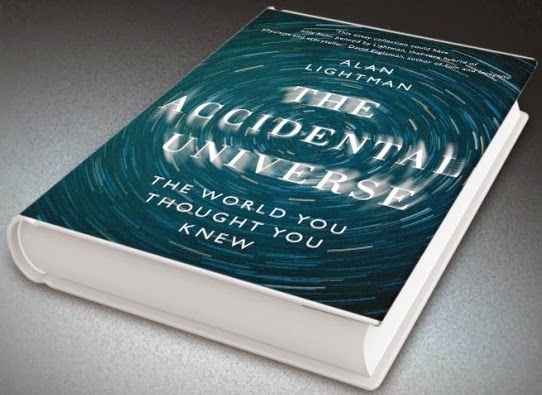 “As MIT’s first professor with a joint appointment in science and the humanities, Alan Lightman sometimes found himself teaching physics in the morning and then walking across a courtyard to lead a fiction writing class in the afternoon. He’d go from speaking to students about 'a world of pure logic, pure reason, pure cause and effect' to coaching them on how best to evoke 'the messy nature of human affairs.' Lightman, a physicist turned novelist (Einstein’s Dreams was a bestseller and The Diagnosis was a finalist for the National Book Award), is like a one-man bridge between what C.P. Snow, in 1959, famously described as 'the two cultures' of the sciences and the humanities, realms of knowledge whose growing estrangement Snow deplored.
In his new collection of essays, The Accidental Universe: The World You Thought You Knew, Lightman explores the way recent (and not-so-recent) discoveries and theories in physics and cosmology affect the sort of questions human beings ask in fiction: questions about the meaning of life, the nature of morality, the importance of love. These are obviously puzzles that concern many physicists as well as novelists. But even those scientists who excel at penning lucid popular explications of their work are rarely as gifted at articulating the 'messy' bits, such as the contradictory human desires for order and transgression, or our delusory longing for permanence. Some of what Lightman writes about in The Accidental Universe could be called philosophical or metaphysical and some of it verges on the poetic, but whatever the subject, he writes with a limpid serenity and frankness that feels as fresh and as clarifying as a spring rain.”
— Laura Miller, Salon
Read more…
Posted by Elora Writers Festival at 2:37 PM