Some Words Are Not For Sale 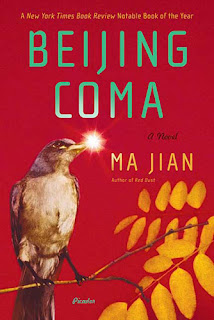 "In a dramatic act of protest at this week's London Book Fair, Chinese author Ma Jian [whose novel 'Beijing Coma' is banned in his native country] smeared red paint across his face to demonstrate his anger at the choice of China as the event's 'market focus.'
It was the latest development in the row over the British Council's collaboration with China's General Administration of Press and Publications (Gapp). Critics have attacked China's record on censorship and selection of authors invited to London. [...]
The incarcerated Nobel laureate Liu Xiaobo should have been among the authors invited, he said, calling the 180 Chinese publishers present at the fair 'the mouthpiece of the Chinese communist party.'
In this book fair that looks so modern, so impressive, so beautiful, you will not see the ugly reality that lies behind, you will not see the Tibetan lamas who have set fire to themselves, you will not hear the voices of the writers who are persecuted in China,' said Ma. The situation was 'a dishonour to the values that make western civilisation so strong,' he added."
— Benedicte page, The Guardian
Read more... 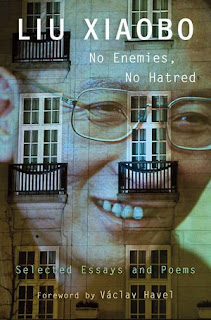 "The collected writings of Chinese Nobel prizewinner Liu Xiaobo have been translated into English for the first time, but there will be no interviews, bookshop signings or appearances at literary festivals. The author is not even aware of the English translation, because he remains incarcerated in a Chinese jail and his wife is under house arrest.
Liu, who won last year's Nobel peace prize, is serving an 11-year sentence that began in 2009 for 'inciting subversion of state power.' Friends have been unable to contact his wife, Liu Xia, even though she has not been charged with anything.
The 55-year-old former professor at Beijing University has repeatedly been detained or arrested and sentenced over the years for his relentless but peaceful political activities, calling for democratic reforms, including freedom of expression, and condemning China's treatment of Tibet. He was barred from attending the Nobel ceremony, and at the funeral of his father earlier this year he was forbidden from talking to anybody."
— Dalya Alberge, The Guardian
Read more...
Buy these books here...
Posted by Elora Writers Festival at 9:44 AM