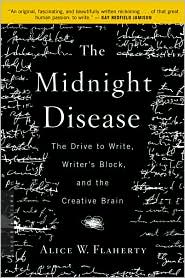 "Why is it that some writers struggle for months to come up with the perfect sentence or phrase, while others, hunched over a notepad or keyboard deep into the night, seem unable to stop writing? In The Midnight Disease: The Drive to Write, Writer's Block, and the Creative Brain (Houghton Mifflin, January), neurologist Alice W. Flaherty explores the hows and whys of writing, revealing the science behind hypergraphia — the overwhelming urge to write — and its dreaded opposite, writer's block. The result is an innovative contribution to our understanding of creative drive, one that throws new light on the work of some of our greatest writers."
— Houghton Mifflin Harcourt
Read more...

"Isaac Asimov, who wrote nearly 500 books, is a classic example. He would sit down and compose 90 words a minute on his typewriter and reportedly never suffered a blocked moment. Everyone thinks of Proust as hypergraphic because he wrote such a long novel over such an extended time. Other writers often described as hypergraphic include Stephen King, Charles Dickens, Honoré de Balzac, Agatha Christie, Anthony Trollope, John Updike, Herman Melville, and Joyce Carol Oates. [...]
Certain brain conditions can trigger it [hypergraphia], and they all seem to involve the temporal lobes. It was Norman Geschwind [’51] and colleagues who first showed an association between temporal lobe epilepsy and hypergraphia. Fyodor Dostoevsky’s temporal lobe epilepsy almost certainly caused his prolific writing. Just before his seizures, he would enter a state of religious ecstasy in which his world was flooded with meaning. Between seizures, he wrote hypergraphically, often about his struggle with the fact that the periods in which he seemed to experience the highest truths were also the product of a disease."
— Alice Flaherty, in conversation with Paula Byron (Harvard Medical Alumni Journal)
Read more...

Buy this book here...
Posted by Elora Writers Festival at 11:10 AM