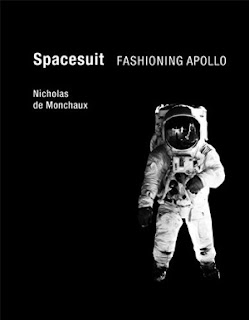 "[Nicholas] De Monchaux has constructed Spacesuit [: Fashioning Apollo] (maybe slightly too cleverly) as a series of layers, each corresponding to the 21 layers that comprised the A7L space suit of the Apollo missions. The author revels in finding curious details from the material history of the world, and Spacesuit bursts with dinner-party fodder: Did you know that the U.S. government’s documentation of the Bikini Atoll nuclear tests created a worldwide film shortage? Or that the Apollo mission’s computer-backup system was crafted into a binary pattern that was then physically woven into ropes? And that only seamstresses could be called upon to do this work properly? [...]

The narrative heart of Spacesuit is the story of Playtex, the women’s undergarment manufacturer. The company, known at the time as the International Latex Corporation, triumphed over the more politically connected, engineering-driven Hamilton-Standard to win the Apollo lunar space-suit contract. It plays out like an after-school special: ILC’s team, a motley group of seamstresses and engineers, led by a car mechanic and a former television repairman, manages to convince NASA to let them enter their 'test suit' in a closed, invitation-only competitive bid at their own expense. They spend six weeks working around the clock — at times breaking into their own offices to work 24-hour shifts — to arrive at a suit solution that starkly outperforms the two invited competitors. In open, direct competition with larger, more moneyed companies, ILC manages to produce a superior space suit by drawing on the craft-culture handiwork and expertise of seamstresses, rather than on the hard-line culture of engineering.
[...] the suits, de Monchaux says, were never actually constructed according to engineering drawings. The drawings were always descriptive, not prescriptive: produced after the fact. To fit into NASA’s engineering system, ILC had to essentially reverse-engineer construction documents of each space suit after they had already been produced. This seemingly small detail points to the vast blind spots across different cultures of making and knowing, and de Monchaux happily points out the appealing irony: The very image of NASA’s technical triumph, the most iconic image of the space race, is in fact a 'throwback' — more craftwork than Kraftwerk."
— Rosten Woo, Los Angeles Review of Books
Read more...