The Psychos Among Us 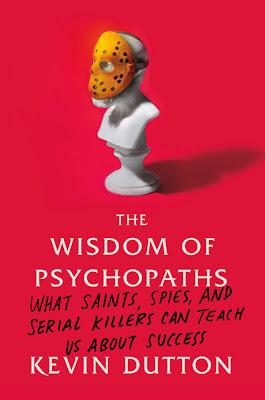 "Do you think like a psychopath? It has been claimed that one quick way of telling is to read the following story and see what answer to its final question first pops into your head:
While attending her mother's funeral, a woman meets a man she's never seen before. She quickly believes him to be her soulmate and falls head over heels. But she forgets to ask for his number, and when the wake is over, try as she might, she can't track him down. A few days later she murders her sister. Why? [...]
[Kevin] Dutton's book at any rate supports the idea that to thrive a society needs its share of psychopaths – about 10%. It not only shows the value of the emotionally detached mind in bomb disposal but also the uses of the psychopath's ability to intuit anxiety as demonstrated by, for example, customs officials. Along the way his analysis tends to reinforce the idea that the chemistry of megalomania which characterises the psychopathic criminal mind is a close cousin to the set of traits often best rewarded by capitalism. Dutton draws on a 2005 study that compared the profiles of business leaders with those of hospitalised criminals to reveal that a number of psychopathic attributes were arguably more common in the boardroom than the padded cell: notably superficial charm, egocentricity, independence and restricted focus. The key difference was that the MBAs and CEOs were encouraged to exhibit these qualities in social rather than antisocial contexts."
— Tim Adams, The Guardian
Read more...
Posted by Elora Writers Festival at 3:48 PM