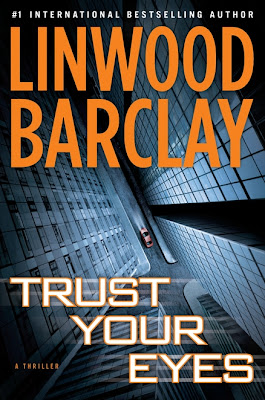 "The main plot is a riff on Rear Window, but instead of an broken-legged journalist, we have solitary schizophrenic Thomas Kilbride. Thomas spends his days travelling the Earth via a computer program that sounds a lot like Google Maps. On one of his virtual journeys, he sees a murder. But who is going to believe a madman?"
— Margaret Cannon, The Globe and Mail
Read more...

"Linwood Barclay’s latest novel, Trust Your Eyes, has been picked up by Warner Bros. following a bidding war and is heading for the big screen.
'This is kind of thing I’ve been wishing for since I was a kid. It just took a while. I feel very lucky,' the former Toronto Star columnist told theatre critic Richard Ouzounian in an email Tuesday.
The movie version of Barclay’s 11th novel, which hit shelves earlier this month [September], will be directed by Todd Phillips (Old School and The Hangover trilogy) according to Hollywood trade publication Variety. It will be Phillips’ first thriller."
— Linda Barnard, The Star
Read more...