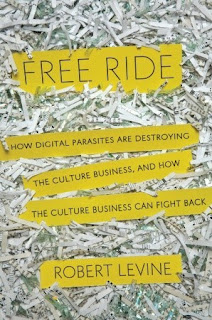 “'It’s never been easier to distribute creative work. At the same time, it’s never been harder to get paid for it,' according to former Billboard editor and New York Times writer Robert Levine. [...]
For those who think the Internet should remain a sprawling bazaar of free samples, a utopian clearing house for consumers who don’t pay, Levine has a harsh, well-researched wake-up call: 'It’s time to ask whether any significant professional media business can thrive in an environment where information can be taken so easily. When nearly a quarter of global Internet traffic consists of pirated content.'
In 2003, for example, NBC delivered an $800-million (U.S.) profit to its owner, General Electric. Just seven years later, the network was looking to lose more than $100-million. At the same time, Levine says, while viewers were busy downloading Saturday Night Live from the Internet, Google was poised to buy YouTube for $1.65-billion."
— Paula Todd, The Globe and Mail
Read more...