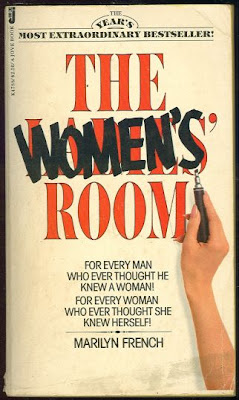 "[...] With steely views about the treatment of woman and a gift for expressing them on the printed page, Ms. French transformed herself from an academic who quietly bristled at the expectations of married women in the post-World War II era to a leading, if controversial, opinionmaker on gender issues who decried the patriarchal society she saw around her. 'My goal in life is to change the entire social and economic structure of Western civilization, to make it a feminist world,' she once declared.
Her first and best-known novel, The Women’s Room, released in 1977, traces a submissive housewife’s journey of self-discovery following her divorce in the 1950s, describing the lives of Mira Ward and her friends in graduate school at Harvard as they grow into independent women. The book was partly informed by her own experience of leaving an unhappy marriage and helping her daughter deal with the aftermath of being raped. Women all over the world seized on the book, which sold more than 20 million copies and was translated into 20 languages.
Gloria Steinem, a close friend, compared the impact of the book on the discussion surrounding women’s rights to the one that Ralph Ellison’s Invisible Man had had on racial equality 25 years earlier.
'It was about the lives of women who were supposed to live the lives of their husbands, supposed to marry an identity rather than become one themselves, to live secondary lives,' Ms. Steinem said in an interview Sunday. 'It expressed the experience of a huge number of women and let them know that they were not alone and not crazy.'
— A. G. Sultzberger and Herbert Mitgang, The New York Times
Read more...

Buy this book here...
Posted by Elora Writers Festival at 11:28 AM