Come and be read to... Ken McGoogan 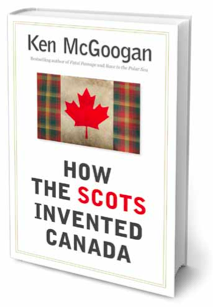 "Ken McGoogan is the author of four Canadian bestsellers about the search for the Northwest Passage, all of which have been published internationally: Fatal Passage, Ancient Mariner, Lady Franklin’s Revenge, and Race to the Polar Sea.
His awards include the Pierre Berton Award for History, the Writers’ Trust of Canada Drainie-Taylor Biography Prize, the Canadian Authors’ Association History Award, the UBC Medal for Canadian Biography, and an American Christopher Award for a work of artistic excellence that 'affirms the highest values of the human spirit.' Ken made a cameo appearance in the BBC docudrama based on his book Fatal Passage.
He serves as chair of the Public Lending Right Commission, is a fellow of the Royal Canadian Geographical Society, and sails in the Northwest Passage as a resource historian with Adventure Canada. Ken reviews books for The Globe and Mail, writes a column for Canada's History magazine [...]"
— from his blog
Read more...

About his latest book:
"How the Scots Invented Canada provides a pleasurable way to get to know many of the most colourful men and women in our history. [...] and your name doesn’t have to begin with Mc or Mac to savour this book."
— The Globe and Mail

"My favourite Scottish holiday tradition has long been The Ba. That’s the lunatic game the Orcadian Scots play at Christmas and New Year’s. A couple of hundred players, mostly young men, take over the streets of Kirkwall and participate in this rugby-like game that involves carrying a cork-filled leather ball, 'the ba,' either up the main street or down it. Each team has dozens of players, no limit, and some of them harbour grudges. But the main difference from rugby is that there are no rules – none.
Anything goes. So maybe I should clarify. I love the idea of someone else participating in The Ba, whose disputed origins are lost in the mists of time. But no, I cannot recommend that tradition to Canadians who wish to embrace the Scottish dimension of the holiday season that is almost upon us. I am thinking mainly of my one-year-old grandson, James Jerzy McGoogan (pictured below), to whom I dedicated my book How the Scots Invented Canada. Do I want him ever to play in The Ba? No, I do not."
— Ken McGoogan, The Savvy Reader
Read more... 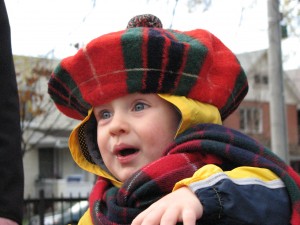 Listen to Ken McGoogan here in conversation about How the Scots Invented Canada with Shelagh Rogers on her CBC radio programme The Next Chapter.

For more about Ken McGoogan and all the other fine Canadian writers who will be joining us on Sunday, May 27 go here...
Posted by Elora Writers Festival at 1:49 PM