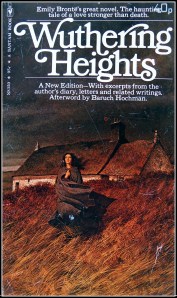 "Many people, generally those who have never read the book, consider Wuthering Heights to be a straightforward, if intense, love story — Romeo and Juliet on the Yorkshire Moors. But this is a mistake. Really the story is one of revenge. It follows the life of Heathcliff, a mysterious gypsy-like person, from childhood (about seven years old) to his death in his late thirties. Heathcliff rises in his adopted family and then is reduced to the status of a servant, running away when the young woman he loves decides to marry another. He returns later, rich and educated and sets about gaining his revenge on the two families that he believed ruined his life."
— The Reader's Guide to Emily Brontë’s “Wuthering Heights”
Read more...

"[...] Well, you have to keep in mind that what we [men] learn as kids is really hard to deprogram as an adult. And what we learned as kids is that we males are each owed, and will eventually be awarded, a beautiful woman.
We were told this by every movie, TV show, novel, comic book, video game and song we encountered. When the Karate Kid wins the tournament, his prize is a trophy and Elisabeth Shue. Neo saves the world and is awarded Trinity. Marty McFly gets his dream girl, John McClane gets his ex-wife back, Keanu "Speed" Reeves gets Sandra Bullock, Shia LaBeouf gets Megan Fox in Transformers, Iron Man gets Pepper Potts, the hero in Avatar gets the hottest Na'vi, Shrek gets Fiona, Bill Murray gets Sigourney Weaver in Ghostbusters, Frodo gets Sam, WALL-E gets EVE ... and so on. Hell, at the end of An Officer and a Gentleman, Richard Gere walks into the lady's workplace and just carries her out like he's picking up a suit at the dry cleaner. [...]
With Harry Potter, J.K. Rowling played with the convention by having the beautiful girl get awarded to the sidekick character Ron, but she made it a central conflict in the story that Ron is constantly worried that, since Harry is the main character, Hermione will be awarded to him instead. In each case, the woman has no say in this — compatibility doesn't matter, prior relationships don't matter, nothing else factors in. If the hero accomplishes his goals, he is awarded his favorite female. Yes, there will be dialogue that maybe makes it sound like the woman is having doubts, and she will make noises like she is making the decision on her own. But we, as the audience, know that in the end the hero will 'get the girl,' just as we know that at the end of the month we're going to 'get our paycheck.' Failure to award either is breaking a societal contract. The girl can say what she wants, but we all know that at the end, she will wind up with the hero, whether she knows it or not."
— David Wong, Cracked.com
Read more...
Posted by Elora Writers Festival at 7:38 AM