What Child Is This?

"[Beverly Lyon] Clark [in her book Kiddie Lit: The Cultural Construction of Children’s Literature in America (2003)] argues, and demonstrates, that our [...] fairly firm distinction between adult literature and children’s literature did not exist in 19th century America (probably not in the UK either). Writers would write for both children and adults, the reviewers would review (what we now think of as) children’s books as well as (what we now think of as) adult books. And magazines such as The Atlantic Monthly assumed their audience included children as well as adults. As one case study, Clark considers Mark Twain, in particular, The Adventures of Tom Sawyer, and The Adventures of Huckleberry Finn. These days we think of Huckleberry Finn as an adult book and Tom Sawyer as a boy’s book. But that distinction was not a firm one for Twain and his contemporaries. In his own statements on both books Twain vacillated in his sense of his audience and so did his reviewers. Similarly, Louisa May Alcott and her audience did not think of Little Women as a specifically girl’s book. It was a book that could be read with pleasure and edification by both children and adults. In fact, at the time, some considered it a mark of excellence that a book was accessible to children as well as to adults.
The move to differentiate the adult from the children’s audience came in the first and second quarters of the 20th century and succeeded so well that we now assume it without question. And children’s literature has been, for the most part, marginalized.
Clark devotes her final chapter to Disney. She makes the point that prior to the 40s Disney and his work was quite highly regarded in intellectual circles. Some even thought his cartoons were more aesthetically significant than contemporary live-action films. She also points out that anyone going to the movies assumed they would see cartoons before the feature. It didn’t make any difference whether the feature was a light-hearted comedy or a serious drama, you’d see cartoons first. Cartoons became children’s fare, she argues, after WWII and as a side-effect of TV, which made it easier to develop niche audiences."
— Bill Benzon, The Valve
Read more... 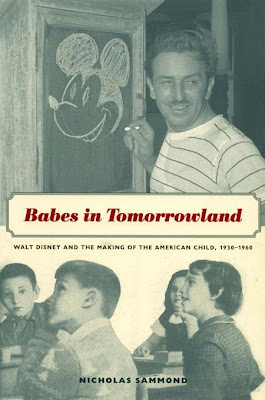 "[...] Now, if you look at some of our most famous cartoon characters--such as Bugs Bunny and Mickey Mouse--you'll see that they have characteristics that the minstrel had: white gloves, wide eyes and a huge painted-on mouth, and a complete lack of respect for authority. (This was truer of early Mickey of the late 1920s and early 1930s than it was of later Mickey.)"
— Nicholas Sammond, author of Babes in Tomorrowland, in conversation with Henry Jenkins, Confessions of an Aca-Fan
Read more...

"Who made the normal American child? In Babes in Tomorrowland [: Walt Disney and the Making of the American Child, 1930-1960 (2005)] Nicholas Sammond traces a path back to the sources of that child—one that links Margaret Mead to the Mickey Mouse Club and behaviorism to Bambi—to demonstrate that the production of a generically normal American child in the early twentieth century was as much the work of popular media as it was of developmental science. To locate that child, Sammond draws on popular child-rearing manuals and periodicals, mainstream sociological texts, and advertisements that targeted a burgeoning youth market. He also examines the films, TV programs, and ancillary products—everything from milk bottles, to school supplies, to wristwatches—of Walt Disney Productions, and the publicity Disney used to pitch its products. Sammond delineates the institutional and discursive ties that bound industry to science to the home, revealing a child that was as much the creature of popular media as the victim of its excesses."
— University of Toronto Faculty Bookshelf
Read more...