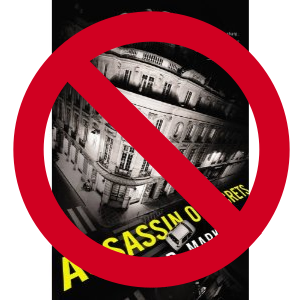 In 2007, [Quentin] Rowan self-published a collection of short stories. Using this presumably as his calling card, he signed a book deal with Little, Brown for a series of spy novels starring a James Bond-like hero, Jonathan Chase. He used the pseudonym QR Markham.
In retrospect, that was a warning - the name had been copied from the pseudonym used by Kingsley Amis for his own James Bond novel.
The first book in the series, The Assassin of Secrets (sic), appeared at the beginning of November this year. It had a print run of 6,500, plus a deal to publish an edition in the UK. It was launched at a spy-themed party at [Brooklyn bookstore] Spoonbill & Sugartown. The book received a starred review from Kirkus (a 'dazzling, deftly controlled debut'), while Publishers Weekly said that while it 'strays far enough into James Bond territory to border on parody," the book was praised for its 'fine writing. [...] The obvious Ian Fleming influence just adds to the appeal,' it concluded.
A week later, The Assassin of Secrets (sic) was dramatically pulled from bookstores after a James Bond forum spotted that passages in the book were copied word-for-word from prominent spy novels. The forum discussion was seen by the author Jeremy Duns, who was quoted praising the work on the back of the book. He immediately contacted the book's publishers.
The book's withdrawal led to a brief spike in sales, and an in-depth confirmation of the charges by Edward Champion on the website Reluctant Habits, who found copied passages in the text from several spy novels including The Tears of Autumn [by Charles McCarry], and James Bond novels License Renewed and For Special Services.
Champion also discovered that Rowan's stories for BOMB, The Paris Review, and a piece he wrote for us all contained heavily plagiarized material.

[In an interview with Jeremy Duns, Quentin Rowan says:]
"[...] things really got out of hand for me. I just didn't feel capable of writing the kinds of scenes and situations that were asked of me in the time allotted and rather than saying I couldn't do it, or wasn't capable, I started stealing again. I didn't want to be seen as anything other than a writing machine, I guess." [...]
I rarely slept and mostly felt like an actor on a stage in my day to day life. Signing books made me feel deathly ashamed, around so many good people, but I'd already thrown the dice so long ago by that point I felt there was nothing I could do but play the out the awful pantomime... I can only compare it to other kinds of obsession or addictive behavior like gambling or smoking: in that there was no need to do it initially, but once I'd started I couldn't stop and my mind kept finding ways to rationalize the behavior. Even though, somewhere deep in the chasms of my thick brain, I knew it would destroy me."
— Andrew Losowsky, Huffington Post
Read more...

"[Quentin Rowan as Q.R.] Markham, Page 13 [of Assassin of Secrets] : 'The boxy, sprawling Munitions Building which sat near the Washington Monument and quietly served as I-Division’s base of operations was a study in monotony. Endless corridors connecting to endless corridors. Walls a shade of green common to bad cheese and fruit. Forests of oak desks separated down the middle by rows of tall columns, like concrete redwoods, each with a number designating a particular work space.'

Taken from [James] Bamford, Page 1 [of Body of Secrets: Anatomy of the Ultra-Secret National Security Agency] : 'In June 1930, the boxy, sprawling Munitions Building, near the Washington Monument, was a study in monotony. Endless corridors connecting to endless corridors. Walls a shade of green common to bad cheese and fruit. Forests of oak desks separated down the middle by rows of tall columns, like concrete redwoods, each with a number designating a particular work space.' ”
— Edward Champion, Reluctant Habits
Read more...
Posted by Elora Writers Festival at 2:39 PM