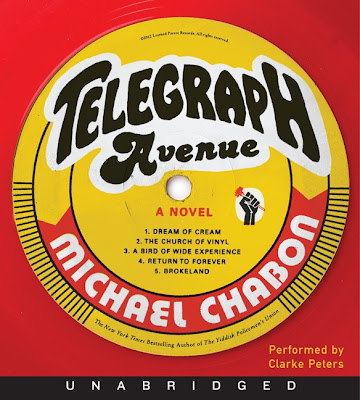 "For most of human history, literature was transmitted orally from storyteller to listener. In theory, therefore, a book read by an actor or an author should feel like the most natural thing in the world.
In reality, the book-length recitation turns out to be a very tricky medium. A good reader can lift a mediocre book above its station. A bad reader can ruin a masterpiece. And there are all kinds of variation in between: A so-so book rich with incident and characters can delight, while a good book can be good in the wrong ways, with sumptuous, tightly written sentences that make it almost impossible to stick with, especially for listeners who are driving, or making dinner — which is to say, most of the intended audience.
A prime example of a good book defeated by the format is Telegraph Avenue (Harper Audio, $44.99), Michael Chabon’s teeming novel about race, human relations and a lot of other stuff swirling around a vintage record store in Oakland, Calif. The language is dense, allusive, hip and sharp, which is to say, very difficult to perform. [...] By the second disc in a marathon that goes on for more than 18 hours, the thought arises that some books simply need to be experienced in black type. "
— William Grimes, The New York Time
Read more...

You can find a wide selection of Audio Books here...
Posted by Elora Writers Festival at 10:50 AM