Scott Chantler... see him at the Festival on May 25 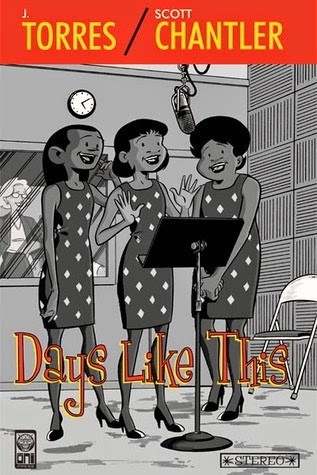 "'I love to tell stories,'" says Scott Chantler. 'That's what drives me. So when the chance came along to work on a graphic novel, I seized it.'
Days Like This, illustrated by Chantler and written by J. Torres, is the fictionalized account of a teenage girl group's rise to stardom during the early 1960s. 'This was a fascinating project for me,' explains Chantler. 'It's exactly the type of work I'd been looking for in comics, because I can't think of another book like it. It's personal and character-driven, and makes meaningful use of the time period. It's not just some nostalgia trip. It gave me an opportunity to do a lot of juicy research and challenged me to represent the era properly, but without ramming it down people's throats. There is something iconic to the story that I wanted to reflect in the art.'
The book hits store shelves March 26 and makes its official debut at the Toronto Comic Arts Festival on March 29. If it is not available at your favourite bookseller, it can be ordered.
At [the University of] Waterloo, Chantler refined his talents as a visual story teller while he studied Fine Arts and Film. His popular comic strip, 'Manly Man', ran in Imprint 1991-92. More importantly, it was at Waterloo [University] that he met his wife Shari.
After graduation, he landed a position with Creative Options in Waterloo. He illustrated employee communications campaigns on safety, loss prevention, and customer service for major American retailers such as JCPenney, Pep Boys and Hallmark.
'But there are only so many ways to creatively illustrate how to lift a box safely and I yearned for work that was more challenging and entertainment-driven,' explains Chantler. Shortly after setting up shop as a freelance illustrator, he started an online comic strip, which caught the attention of comic book writer J. Torres (Sidekicks, X-Men: Ronin). Their online correspondence eventually led to Torres offering him the art chores on Days Like This.”
— James Howe, University of Waterloo
Read more...

Buy all his books here…