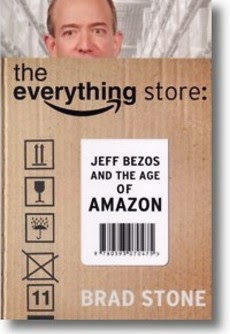 “Amazon has begun discouraging customers from buying books by Malcolm Gladwell, Stephen Colbert, J. D. Salinger and other popular writers, a flexing of its muscle as a battle with a publisher spills into the open.
The Internet retailer, which controls more than a third of the book trade in the United States, is marking many books published by Hachette Book Group as not available for at least two or three weeks. [...]
Generally, most popular books are available from Amazon within two days. [...]
'We have been asked legitimate questions about why many of our books are at present marked out of stock with relatively long estimated shipping times on the Amazon website, in contrast to immediate availability on other websites and in stores,' said Sophie Cottrell, a Hachette spokeswoman. 'We are satisfying all Amazon’s orders promptly.'
But, she added, 'Amazon is holding minimal stock' and restocking some of Hachette’s books 'slowly, causing "available 2-4 weeks" messages.'
For at least a decade, Amazon has not been shy about throwing its weight around with publishers, demanding bigger discounts and more time to pay its bills. When a publisher balked, it would withdraw the house’s titles from its recommendation algorithms.
‘Typically, it was about 30 days before they’d come back and say, “Ouch, how do we make this work?”’ an Amazon buyer told the journalist Brad Stone in his book about the company, The Everything Store.”
— David Streitfeld, The New York Times
Read more...

Buy Brad Stone's book, and all the books mentioned in this New York Times article here...

See a related post here...
Posted by Elora Writers Festival at 8:11 AM