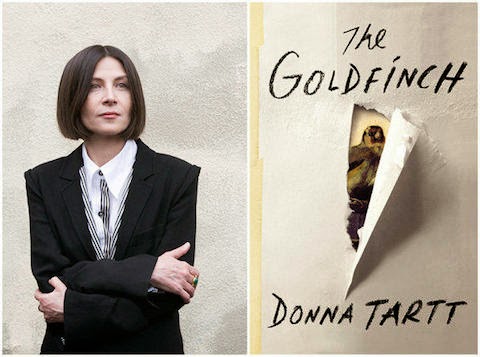 “2014's Pulitzer Prize for Fiction has been awarded to Donna Tartt, for her latest novel The Goldfinch.
Tartt's sprawling epic triumphed over the two other nominees, The Son by Philip Meyer and The Woman Who Lost Her Soul by Bob Shacochis.
Tartt's novel tells the story of Theodore Decker, an orphaned Manhattanite who winds up in possession of a renowned painting, Carel Fabritius's "The Goldfinch." Tartt's coming of age story follows Theo to Las Vegas, New York City's Lower East Side, and Amsterdam, where the events of his life are intermixed with his burgeoning theories on art and love.”
— Maddie Crum, Huffington Post
Read more…

“One of the greatest of Tartt's many gifts is her ability to assure readers that they're in the hands of a trustworthy storyteller. Her novels always feature surprising, in some cases preposterous, narrative elements, but she makes us believe them. She'll wrong-foot us, but she won't cheat us. Characters will certainly go off the rails, but the plot won't. This is an amazing achievement.”
— Geoff Nicholson, Los Angeles Times (October 17, 2013)
Read more…

See an earlier post that mentions The Goldfinch here...

And buy all of Donna Tartt's books here...
Posted by Elora Writers Festival at 12:29 PM