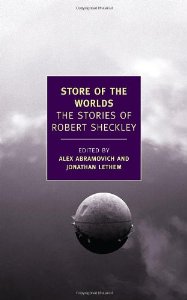 "Robert Sheckley wrote tightly crafted, whacked-out social satire in the form of science-fiction stories, using the conceit of future worlds to provide an alienating vantage point on the present. His heyday was the 1950s, when he emerged as a young writer in the pages of thumb-staining pulp mags like Galaxy, Astounding, and Infinity. Sheckley was part of a generation that disassembled the square-jawed tropes of 1920s space operas to produce a new, proto-postmodernist mode of literature, hidden within a genre that many readers at the time dismissed as kiddie lit. Unlike the more mainstream-friendly sentimentalism of Ray Bradbury, or the soberly cosmological world building of Isaac Asimov, Sheckley’s work is unabashed termite art. He illuminates standard sci-fi’s cutout characters and quasi-magical contraptions with a hallucinatory, Technicolor vibrancy, spinning yarns more fabulist than plausible, banged out as permutations of his own pet obsessions, among them mind control, extraterrestrial psychology, and the cruelties of love. [...] 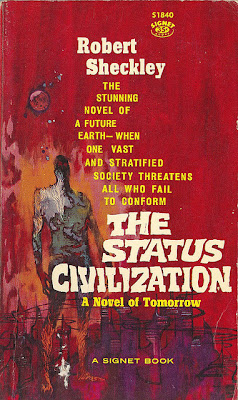 Though Sheckley continued to write almost up until his death in 2005, Jonathan Lethem and Alex Abramovich’s new collection, Store of the Worlds, leans heavily on the author’s work from the 1950s, including just four tales written in the 1960s, and one in the 1970s. In keeping with the implicit goal of other NYRB science-fiction reissues, they want to rescue Sheckley from the genre ghetto, but at the same time make clear that his talent could only have been forged within that particular crucible."
— Ed Halter, BookForum
Read more...