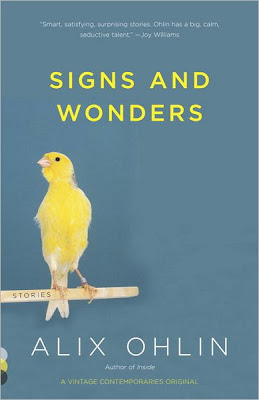 "There are two species of novelist: one writes as if the world is a known locale that requires dutiful reporting, the other as if the world has yet to be made. The former enjoys the complacency of the au courant and the lassitude of at-hand language, while the latter believes with Thoreau that 'this world is but canvas to our imaginations,' that the only worthy assertion of imagination occurs by way of linguistic originality wed to intellect and emotional verity. You close Don Quixote and Tristram Shandy, Middlemarch and Augie March, and the cosmos takes on a coruscated import it rather lacked before, an 'eternal and irrepressible freshness,' in Pound's apt phrase. His definition of literature is among the best we have: 'Language charged with meaning.' How charged was the last novel you read?"
— William Giraldi, in a New York Times review of Alix Ohlin's Inside and Signs and Wonders
Read more... 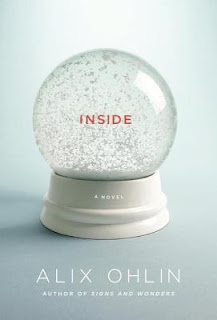 "No one can write books like Inside – a novel – and Signs and Wonders – a short-story collection – unless she grew up watching a lot of Ingmar Bergman and Woody Allen films (not a wild guess since Alix Ohlin is the daughter of Peter Ohlin, one of the world’s great authorities on Bergman). But Ohlin is so completely herself as a fiction writer that you don’t have to have seen any Bergman or Allen to get what she’s doing – all you need is a lot of smarts and a wry sense of humour."
— T.F. Rigelhof, The Globe and Mail
Read more...