"It never did any child any harm to have something that was a tiny bit above them anyway, and I claim that anyone who can follow Doctor Who can follow absolutely anything." — Dianne Wynne Jones 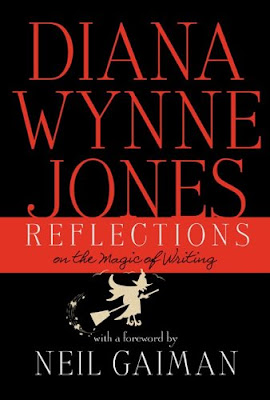 "Reflections on the Magic of Writing is a collection of some thirty pieces written over the years by the late Diana Wynne Jones. Most are short, like her comments on “Reading C. S. Lewis’s Narnia” or her review of Mervyn Peake’s Boy in Darkness, and several are occasional, like her unpublished letter of 1991 to the TLS on “The Value of Learning Anglo-Saxon”, or the school Speech Day address of 2008 on “Our Hidden Gifts.” Longer pieces include a previously published article on “The Shape of the Narrative in The Lord of the Rings,” three lectures given on “A Whirlwind Tour of Australia” in 1992, and a conference paper from 1997, “Inventing the Middle Ages.” [...]
Her memories of Tolkien are, however, untouched by sentiment. She confirms the reports that he was a dreadful lecturer, disorganized and inaudible, so bad that she wonders if he was doing it on purpose; for in those days, if you had driven your audience away by, say, the third week, you could cancel the rest of the seven-week course 'and still get paid.' She sat there obdurately, however, and learned a lot about the way you could tweak a story from simple quest-narrative to The Pardoner’s Tale. Her long analysis of The Lord of the Rings as a series of movements, each with its own coda, says more about that narrative than, I suspect, Tolkien could."
— Tom Shippey, The Times Literary Supplement
Read more...

You can buy this book and all of Dianne Wynne Jones' other books here...
Posted by Elora Writers Festival at 2:23 PM