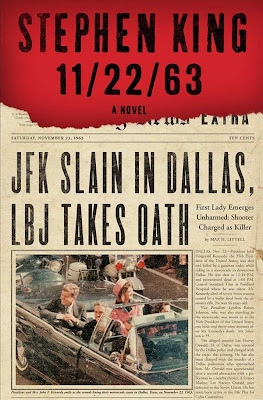 "So, why didn’t I read [Stephen] King’s fiction? Was I simply an elitist, anti-populist literary snob who felt he would be soiled by reading stuff that sold? I do have some snob in me — it’s my sense that a lot of the books read by practically nobody are often good, whereas a lot of the books read by millions are often crap — but the term doesn’t fully describe my resistance to King’s fiction. [...]
My wife felt it was wrong to stand in judgment of people who read fiction in order to escape from life, and I said she was right: I didn’t feel morally superior because I read John Cheever or David Foster Wallace or William Styron or Zadie Smith or Mary Lee Settle instead of Stephen King.
I did feel, however, that I demanded something different (something more?) from a novel than I guessed most of the readers of Stephen King did. (Not that this made me morally superior, just more demanding, a high-maintenance reader.) Though of course I’d never read a King novel (or story), so maybe I was wrong.
[...] Why, I wondered again, do some people in the literary business regard this extremely successful writer of genre fiction as a first-rate writer of literary fiction, a 'major' contributor to American literary culture? How is it possible that a novel as bloated and mediocre as 11/22/63 is can be deemed by the New York Times Book Review as one of the five best books of fiction of the year? Do we fear being labeled 'elitist' or 'liberal' if we don’t reward commercial success in other ways (as if an enormous advance and a river of royalties are not reward enough)? Or do we believe that commercial success on the King scale signifies, almost by definition, quality, the way a 20,000 square-foot house supposedly signifies to passersby that the owners must be important?"
— Dwight Allen, Los Angeles Review of Books
Read more...