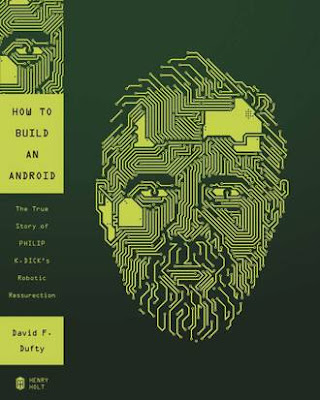 “How to Build an Android [:The True Story of Philip K. Dick's Robotic Resurrection] is the honest title of an earnest book, the first by David F. Dufty, a senior research officer at the Australian Bureau of Statistics. It explains how a team of researchers at the University of Memphis collaborated in 2005 with an artist and robotics expert, David Hanson, to create what was then the most sophisticated android anywhere, a replica of the science-fiction writer Philip K. Dick.
They called him Phil. [...]
[Hanson] left Phil’s head in a carry-on bag in the overhead bin. He didn’t realize what he had done until he got to San Francisco. The bag continued on to Orange County, and has never been recovered. Where did Phil go? To many people the disappearance sounded like something out of Philip K. Dick, whose lurid, drug-enriched work inspired Hollywood’s dark science-fiction thrillers Blade Runner, Total Recall and more."
— Lawrence Downes, The New York Times
Read more...

Get this book, and of all of Philip K. Dick's books here...
Posted by Elora Writers Festival at 1:07 PM